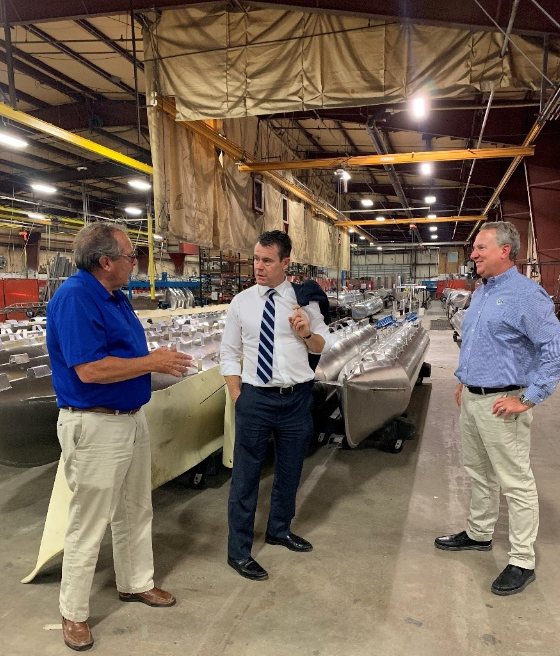 Smoker Craft Boats, recipient of NMMA’s inaugural Advocate of the Year award, hosted Senator Todd Young (R-IN) at its facility in New Paris, Indiana last week, capping off a string of industry plant tours during the summer Congressional recess. NMMA members have held more than 20 plant tours with elected officials since the beginning of the year, with several visits still to come.

Ahead of the tour, Doug Smoker, president of Smoker Craft, and Peter Barrett, senior vice president of marketing and corporate development at Smoker Craft, gathered the company’s leadership for a discussion with Senator Young on pressing policy issues, including the detrimental effects that tariffs are causing across the recreational boating industry. Additionally, the group traded ideas on bolstering the country’s workforce, with Senator Young highlighting his bipartisan DRIVE-Safe legislation, which would allow licensed commercial drivers between the ages of 18-21 to transport goods across state lines following an apprenticeship program with extensive training.

“We are pleased that Senator Young was able to meet with us and tour our facility in New Paris, Indiana,” said Barrett. “Our management staff was offered the unique opportunity to share their thoughts on the current business environment. Local workforce development and the impact of burdensome tariffs on imported parts and European exports was discussed at length. With both boating and manufacturing knowledge, Senator Young will make a great new addition to the Congressional Boating Caucus.”

If you have questions or are interested in scheduling a facility visit with your members of Congress, please contact NMMA senior vice president of government and legal affairs, Nicole Vasilaros at nvasilaros@nmma.org; NMMA director of political advocacy and engagement, Erica Crocker at ecrocker@nmma.org or NMMA manager of Great Lakes policy and engagement, Jill Sims at jsims@nmma.org.