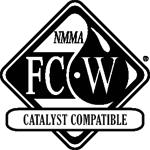 The need to protect the catalysts adds another dimension to the lubrication demands of marine engines whose duty cycles have always discriminated them from over-the-road light and heavy duty automotive engines. High loads, high speeds, and exposure to high levels of humidity and salt water are just a few of the unique characteristics found in marine engines.

This new catalyst-compatible standard draws heavily on the experience and success of the earlier NMMA FC-W® standard, which was developed to meet the needs of large and technically advanced four-stroke cycle marine engines. These include four-stroke cycle outboard engines, which are now taking the place of some conventional two-stroke cycle outboard engines. As a result, the new catalyst-compatible standard can provide the performance required for engines that would otherwise call for NMMA FC-W® lubricants.

This new catalyst-compatible specification follows the longstanding and successful tradition of BIA TC-W, NMMA TC-WII®, NMMA TC-W3®, and NMMA FC-W® programs to assist boaters and manufacturers in identifying the proper engine oils which have been specially formulated to withstand the rigors of use in marine engines. The NMMA FC-W Catalyst Compatible® specification is intended to support the industry in providing long term durability, power and overall consumer satisfaction with marine engines utilizing catalyst after-treatment.