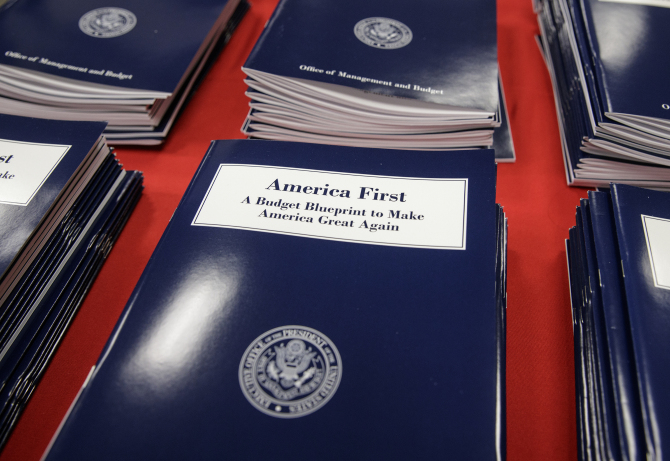 President Trump’s FY 2018 Budget Blueprint was released yesterday, with full budget details expected in May. The FY2018 budget, if enacted, would offset a ten percent increase in defense spending ($603 billion) with a ten percent decrease in non-defense spending ($462 billion), which includes a $1.5 billion (11.7 percent) decrease for the Department of Interior (DOI), a $1 billion cut for the Army Corps of Engineers (16.3 percent), and a reduction of $2.6 billion (31.4 percent) for the Environmental Protection Agency (EPA), departments which have a significant impact on the recreational boating industry.

“The NMMA understands the fiscal climate facing our nation and the need for some streamlining of agency programs for efficiencies. We look forward to working with the Administration and our members on Capitol Hill to ensure a final budget prioritizes outdoor recreation and the boating economy,” stated Thom Dammrich, NMMA president. “Even in limited fiscal times, prioritizing boating and the outdoors will pay dividends for the American economy. We must invest in our federal lands and waters and ensure recreational access and conservation of our nation’s treasured resources.”

While the Budget Blueprint is the Administration’s first fiscal proposal, it will face scrutiny on Capitol Hill, where bipartisan support is required for final passage. Read on for high-level summaries from the Budget Blueprint on branches which play a role in the success of the recreational boating industry and the potential impact the proposed budget may have on your business.

The DOI is responsible for managing branches that impact the boating community including National Park Service and U.S. Fish and Wildlife Service. These departments are integral to providing boating access within the National Park System, promoting fish habitat restoration, and the disbursement of dollars to state agencies through the $600 million Sport Fish and Restoration Boating Trust Fund.

The budget proposal includes reducing funding for acquiring Federal land by more than $120 million and outlines that available discretionary funds would instead be focused on investing in and maintaining existing national parks, refuges, and public lands. Further cuts include the National Wildlife Refuge fund ($480 million), which maintains the Fish and Wildlife Service's 563 wildlife refuges throughout the country and important destinations of recreation for outdoor enthusiasts.

While the proposed $1.5 billion decrease in spending will make new projects difficult and hardly begin to tackle the $12 billion maintenance backlog in the National Park System, NMMA is hopeful the DOI will reach out to stakeholders for innovative public private partnerships and new ways to engage and attract outdoor enthusiasts.

The budget proposal recommends eliminating more than 50 EPA programs and grants. Cuts to the EPA could impact the Clean Water Programs throughout the country, monitoring point and non-point pollution sources in fresh and salt water, Great Lakes Restoration, the Chesapeake Bay Restoration, invasive species and emission levels and standards.

The budget proposal also eliminates the beach monitoring program, which monitors water quality, bacterial concentrations and has the authority to close beaches if they impact human health.

Clean and accessible water is essential to recreational boating, especially in the Great Lakes where threats of invasive species are real and in the Chesapeake Bay, where boating is a popular pastime and contributes to tourism and the local economy.

The budget does propose increased investment in water infrastructure systems including $2.3 billion to the Clean Water and Drinking Water State Revolving Funds, a $4 million increase, or roughly two percent, over 2017 levels. It would also fund the Water Infrastructure Finance and Innovation Act program at $20 million, level with the amount provided in 2017 through the continuing resolution last December.

The budget proposes the elimination of over $250 million in targeted NOAA grants and programs related to coastal and marine management, research, and education. Cuts to NOAA would impact scientific research such as ocean surveys and estuarine research. Specific cuts to the National Marine Fisheries Service (NMFS) are still unknown but could negatively affect saltwater fishing policy, regulation and monitoring. The President’s budget proposal includes eliminating the SeaGrant program, which supports pragmatic research and grants on the country’s bodies of water.

The growth of the 11 million saltwater recreational anglers and its inherent ties to recreational boating make NMFS of particular importance to our industry and an agency NMMA looks forward to continuing engagement.

The budget proposes to strengthen the International Trade Administration’s (ITA) trade enforcement and compliance abilities, including related to anti-dumping and countervailing duty investigations, while “rescaling” its activities related to analyzing trade and promoting exports. Reorganizing the ITA and eliminating the US Trade and Development Agency could be problematic for export and development programs NMMA supports, including our partnership with the International Buyers Program.

NMMA will continue to monitor the budget process as it unfolds on Capitol Hill, including the looming April 28th deadline for the FY 18 budget. Contact Nicole Vasilaros with questions, nvasilaros@nmma.org.