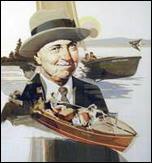 Growing up in the riverside village of Algonac, Michigan had a great impact on Chris Smith, the man whose company, Chris-Craft, would eventually put the American family “on the water”.

Chris’s best friend also happened to be his older brother, Hank. The brothers Smith would fish and hunt along the banks of the St. Clair River. As teenagers, Chris and Hank began to build lake boats to rent to vacationing sportsmen.

At 23, Chris got married and began to raise a family, but he and his brother were still building boats. Only now, they were powered by naphtha-gas engines, not just oars. In fact, by 1906, Smith was launching 26-foot boats that would go 18 miles per hour!

One summer day while whittling a duck decoy (He sold hundreds of them!) near the river’s edge, he was thinking about how fast the local waterbugs could skate around on the water. Chris then told his son, Jay, “...somebody is going to build a boat like those bugs—one that will go on top of the water instead of through it.”

To convert that idea,  that dream, into reality, Smith began to experiment with ways to develop a hull that would plane over the water, not through it! The trial-and-error research led to Smith’s famous “step-boats”, the forerunner of today’s hydroplanes. By 1916, “Chris’s crafts” smashed the world speedboat record with a 63.77 mph performance.

By 1929, Chris-Craft, with sales in the millions was run by son, Jay. (Chris preferred to whittle decoys and dream of ways to make boats go faster.)

Before the death of Chris in 1939, three generations of Smiths (now including Jay’s son, Harsen) were building boats. In fact, a design they pioneered (the modified deep-vee hull) is the concept which made high-speed boating smooth (like a waterbug) and safe enough for a family to enjoy. Thanks, Chris!