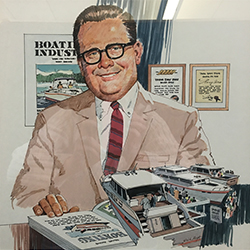 In the decades before two major trade organizations merged to become NMMA, Charles Jones was an industry catalyst and pioneer in the field of boating trade magazines.

Jones was born and raised in St. Joseph, MI, and attended nearby Andrews University with the intention of becoming a high school teacher. While in college, however, he responded to a help-wanted ad for a part-time production assistant and found himself on a different career path. Jones went to work for the fledgling Boating Industry magazine in 1948, working for and mentored by the magazine’s founder, James W. Pleaslee.

Jones rose through the ranks at Boating Industry, holding the positions of managing editor, business manager, and editor before becoming both editor and publisher in 1965. He held the position for the rest of his 45-year career, finally retiring in 1992. Working for Boating Industry, Jones said in a 1989 interview, was “the only job I ever had.”

“The industry was just making a comeback when I came aboard,” he recalled. “It was right after World War II, and there was such a pent-up demand for everything that the manufacturers really couldn’t keep up with orders.” In fact, Jones further noted, at times the magazine had more orders for advertising than it could accommodate.

In addition to overseeing the phenomenal growth of Boating Industry, Jones introduced their annual Marine Buyer’s Guide, now considered an industry standard. He also acquired and developed the Waterway Guide series, a cruising guide to the Intracoastal Waterway that has now been in circulation for over 50 years.

Jones advanced ideas that transformed recreational boating from a specialized sportsman’s pastime into a family activity. He knew the value of using the latest in retail display and merchandising techniques, and communicated that value to many returning war veterans who started boat dealerships in the early 1950s. Later in that same decade, he established the nationwide promotional program “Let’s Go Boating,” which encouraged marine retailers and manufacturers to work together in order to attract new customers to the sport.

From the late 1960s through the early 1970s, Jones created Dealer Display centers—elaborate mock retail showrooms which would eventually become IMTEC. “He always held up the value of the marine dealer,” says Waterway Guide publisher Ted Lotz, who succeeded Jones as Boating Industry publisher. “He saw the dealer as the first line of contact with the consumer. He always believed that education and marketing information were the keys to grow the industry.”

Jones served on many NMMA committees. He also helped establish the Darlene Briggs Marine Woman of the Year Award, presented by the Marine Retailers Association of America. He was also on the receiving end of many industry awards including NMMA’s Chapman Award and the Mel Barr Award from the National Marine Representatives Association. “Charles was a gentle giant,” Lotz says, “Many people will remember the good times they shared with this industry leader.” NMMA president Jeff Napier remembers, “Charles Jones was one of the first people I met when I joined the industry more than 30 years ago and he was a good friend all those years. Actually, he was more of an institution all by himself since he knew everything that was happening and everybody in the industry.” Jones died December 16, 1996 at the age of 69.