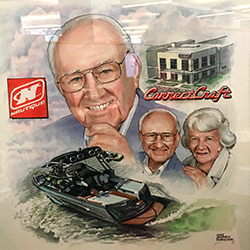 Ralph C. Meloon, Sr. was seven years old when his father, W.C. Meloon founded Correct Craft in 1925, and he has operated, built and sold boats, and promoted boating around the world, since he was a lad of ten. At age 95, he still comes to the office almost daily when in Orlando. Ralph has been instrumental to the company’s success, promoting boating around the world and helping to build Correct Craft and Nautique as premier brands for water ski and wakeboard enthusiasts worldwide.
In his more than 80 years with the company, Ralph has seen Correct Craft through many challenges and helped it capitalize on numerous opportunities. He helped the company survive the Great Depression, by travelling through the eastern United States with his father and brothers, thrilling customers with water toboggans, water skis, aquaplanes and gliders and offering ten and 25 cent boat rides to pay expenses and sell a few boats. During World War II, Correct Craft worked to help the U.S. secure victory, building 400 storm boats in less than three weeks for the military; the company refers to this as the “Miracle in Boats.” This feat also earned the company the Army and Navy “E” Award. Cypress Gardens also launched its water ski show during World War II, and Ralph was the first boat driver. Correct Craft boats were used at Cypress Gardens for more than 50 years.
Correct Craft entered bankruptcy in 1958, and emerged in 1965. However, the Meloon family did not view bankruptcy as a release from their obligations and for the next 20 years worked to pay back their debts; Ralph was instrumental in helping track down and repay each creditor in full.
Ralph held numerous executive positions at Correct Craft including President, Executive Vice President, Treasurer and Secretary. He was named Chairman of the Board in 1975, a position he held until retiring in 2002, and currently serves as Chairman Emeritus. Under Ralph’s leadership, the company developed numerous innovations. It was the first boat company to transport boats on trailers rather than train, to include pylons, and incorporate a swim platforms and tracking fins in its boat designs. Under his watch the company established the first water ski team, introduced Ski Nautique water ski boats, Air Nautique wakeboard boats, the Total Wake Control hull and the Spart Pod 200 dash pod.
During his career, Ralph has visited 85 different nations promoting Correct Craft boats and boating. He has been instrumental in selling boats to water ski federations in numerous countries, including the USSR and China when it was virtually impossible to enter them.
While his success overseas is impressive, it is just one of his many contributions. He created the innovative water ski promotional program, which is still used extensively. He also developed Correct Craft’s Midwest and West Coast territories.
In 1994, Ralph, his brother and nephew received the Award of Distinction from the American Water Ski Educational Foundation for their leadership and support of the sport of water skiing. Among the books written about Mr. Meloon and his family are Saved from Bankruptcy, On the Waters of the World and Parting the Waters.
Ralph has also been active on the Board of Gideons, Christian Business Men’s Committee, Prison Ministries, and Orlando Union Rescue Mission.