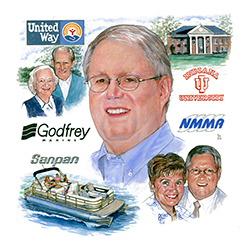 As president and CEO of Godfrey Marine, Robert Deputy’s leadership, commitment to relationships with employees, dealers and suppliers, and dedication to product development were instrumental to the company’s success. Under his direction, Godfrey Marine thrived: When the company was sold in 2005, it had grown from a small manufacturing plant into the largest family-owned independent builder of recreational boating and fishing boats in the U.S.

Originally planning a career in the financial industry, Bob earned his MBA from Indiana University. However, Bob felt a responsibility to help the family business succeed, and after completing an active duty obligation in the U.S. army, Bob joined Godfrey.

Bob worked to create a family environment at Godfrey Marine, treating dealers, suppliers, employees and retail customers as family. He established an ownership culture focused on leading by example, and fostered a passion to excel in any market the company entered. Under Bob’s direction, product design and innovations such as decay-resistant pressure treated wood; spacious, versatile floor plans; reliable electrical systems; and durable upholstery, all of which improved the boat owning experience, were key to the company’s success.

Family participation grew with the company; brothers Larry and Bill joined Godfrey and bother Dick advised in many product innovations. Eventually, the next generation, John, Mike, Anne and Reid, also dedicated their careers to the family business. Bob’s leadership and family involvement helped the company grow from one factory in Elkhart to 13 plants in four states with over one million square feet of manufacturing capacity, and a family of brands that offered a “Boat for Every Passion”—Sanpan, Aqua patio, Sweetwater and Parti Kraft pontoons, Hurricane deck boats and Polar Kraft, Polar and Fishmaster fishing boats.

As other family members took on management responsibilities, Bob’s focus shifted to key industry and community issues. He was a founding member of the Independent Boat Builders (IBBI) buying group, served on the NMMA Board and as Chairman of the National Association of Boat Manufacturers, and actively lobbied in Washington, D.C. to protect and promote the boating industry. His belief in growing the industry rather than trading market share led to his support of the industry’s initial “Grow Boating” campaign.

Bob’s sense of civic responsibility and belief in giving back to the community was evident in Godfrey Marine’s support of United Way, earning the company recognition as the largest per capita contributor to the local United Way chapter for many years. Since the sale of the company in 2005, Bob’s time and talents have shifted to numerous philanthropic endeavors, including serving as Chairman of the Elkhart County Community Foundation, Chairman of the IUSB Advisory Board and helping lead the campaign to build the IU South Bend Elkhart Center. In 2008 Bob received an honorary Doctor of Humane letters from Indiana University in recognition of his lifetime of community service.

Bob exhibits leadership in every endeavor, whether business or philanthropic. He is humble and generous, but the one word that most aptly describes Bob is “family.” His greatest joy is in spending time with his family, which now includes 17 grandchildren. His most enduring legacy is to treat everyone as if they were family—and to remember that it’s not where you start but where you finish.