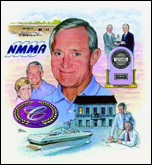 Says son Paxson St. Clair in his nominating letter: “The article in Inter/port states, ‘The NMMA Hall of Fame award was established to bestow recognition and honor upon those who are synonymous with the pursuit of quality, innovation, and perfection within the sphere of their expertise.’ Obviously, I am a bit prejudiced toward my hero, but in my opinion, there is nobody who represents that statement more than my father Pack.” He goes on: “Like many of the previous inductees, Pack has always put the best interests of the industry first and has always been willing to get involved.”

Getting involved has meant many different things over Pack’s 33-year boat building career. Pack is involved in several manufacturing associations, and was an active proponent of the merger between the BIA and NAEBM that created NMMA. He is past chair of both NMMA and NABM. He travels to D.C a couple times a year from rural Kansas, including attending and actively participating in NMMA’s LegCon, to touch base with lawmakers about the industry’s concerns. He believes strongly in the future of the marine industry, and believes just as strongly it “needs to look outside of the present boating public to grow…. Promotion of boating activities in all its aspects needs to have a greater appeal to a larger segment of the general population.” He notes that the industry has a responsibility to sell boating as a family activities, including marine related activities like skiing and fishing, and has been a strong proponent of association activities that further these ends.

Pack has worked as a construction laborer, salesman, and trainee in an Oregon lumber mill. He was a salesman for Loyd St. Clair Lumber Co., and was subsequently a partner in Chanute Lumber Co. His first forray into fiberglass manufacturing came when he was named president, Kustom Recreation, in Chanute. In 1968 he founded Cobalt Boats. Through the years with Cobalt he has been lauded with many honors, including Kansas’ “Man of the Year.”

Many are surprised when they learn that Cobalt builds world-class boats in Neodesha, Kansas. Cobalt is a true American success story, and continues to be a family-owned business. In addition to Man of the Year, Pack has received many industry honors, including the Marine Design Resource Alliance’s “Grow Boating by Design” Award. Presented at NMMA’s IMTEC, the award recognizes his leadership in concept boat design and development. In choosing Pack, Peter Granata, on behalf of its members, stated: “Pack St. Clair’s innovative outlook, his great interest in creative design and his years of dedication to grow boating makes him the ideal recipient for this award.” He has also won Kansas’ “Exporter of the Year,” and Cobalt has come out with near-perfect satisfaction scores in recent J.D. Power and Associates Marine Study.

And of course an inspiration and life long supporter of Pack is Jill St. Clair, his wife and partner for more than 40 years. She has helped in many aspects of growing the business. However her most important roll was in providing inspiration and support to Pack and his family in the early years of the business.

Pack has been known to demonstrate flexibility, in being able to see course changes as positive and capitalize on opportunities. Says Rusty Fleming, “We could all learn a thing or two from ‘Pack the Positive.’ It might be humility or how to be gracious. It might be to say nothing at all if you can’t find something good to say. Or it might be taking as much time in learning how the other guy’s business is doing, as it takes to explain the ups and downs of your own. But the single most important thing you might learn if that nice guys don’t always finish last.” From all the press, it would seem that Pack St. Clair is hero to many in addition to his son Paxson. He has helped to grow an industry that brings joy to millions worldwide, and particularly he has also grown a company that produces a top-quality product within his beloved industry.