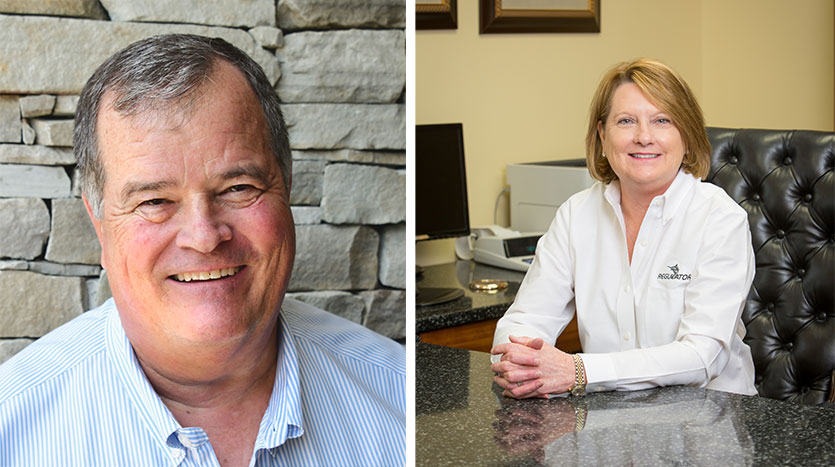 The NMMA announced today the induction of two industry pioneers into the NMMA Hall of Fame, its most prestigious honor. Joan Maxwell, President and Co-Founder of Regulator Marine, and Bill Watters, President of Syntec Industries, will be presented with the 2021 NMMA Hall of Fame Award during the International BoatBuilders’ Exhibition & Conference (IBEX). The ceremony takes place at the show’s annual Industry Breakfast on Tuesday, September 28 from 7:30-9:30am at the JW Marriott Tampa Water Street in Tampa, FL.

“It’s my honor to bestow the 2021 NMMA Hall of Fame Award to my longtime friend and colleague Joan Maxwell,” said Ben Speciale, President, Yamaha Marine Business Unit. “Joan is the epitome of leader, who serves her company and the recreational boating industry with the highest level of integrity. She not only laid the foundation for the success of Regulator Marine, she has fostered countless achievements for our industry and her community.”

Joan, President and co-founder of Regulator Marine, is a trailblazer who has devoted her working life to the marine industry. Through her determination and faith, Regulator has grown to be a leading manufacturer of offshore boats, and earned a reputation as one of the most well-respected brands in the boating industry for more than 30 years running.

Founded by Joan and her husband Owen in 1988 in an abandoned A&P Grocery Store, Regulator set out to reinvent the deep-vee center console experience and engineered what is known today as an unbeatably smooth and dry ride. The company now operates in a state-of-the-art manufacturing facility in Edenton, NC where their expert team continues the legacy Joan and Owen started years ago – always evolving to meet customer demand while staying true to their heritage.

As a respected leader of a premier boat company, Joan has long been actively engaged in the recreational boating industry’s leading organization, the National Marine Manufacturers Association (NMMA). In an historically male dominated industry, Joan became the first woman to Chair the NMMA board of Directors and currently remains on the Boat Divisional Manufacturer’s Board.

Joan’s passion is to personally live out Regulator’s mission – to build the best center console sportfishing boats with people, processes and resources to honor God – and lead her team to do the same.  She demonstrates and demands the highest levels of integrity from her leadership team, and this extends to the factory floor where team members take pride in the company’s motto “Quality before Delivery.”

Her dedication to service is evident not only at Regulator, but also to the local community in which Regulator is located, where she currently serves on the Edenton-Chowan Partnership Board.  Joan established a Volunteer Program at Regulator Marine which pays employees their regular wages during working hours while they volunteer their time and services to local organizations of their choosing. In 2018, Joan established the “In His Service” program at Regulator, which oversees Regulator’s charitable giving, as well as its employee emergency assistance fund. Currently, she is a member of C12, a Christian based leaders’ roundtable that focuses on building better businesses for a greater purpose.

Recognized as an exceptional leader both at her company and in the recreational boating industry, Joan’s accomplishments include: the 2018 Hammond Marine Industry Leadership Award; the Darlene Briggs Marine Woman of the Year Award and the National Association of Manufacturer’s STEP award.

Joan grew up in rural Fairfield, NC. She graduated from Mattamuskeet High School and the University of North Carolina, where she received a BA in history. She is married to Owen Maxwell and they reside in Edenton, NC.

Joan’s willingness to give of her time and energy are well-known in the recreational boating industry, and this leadership inspires us all to pursue the very best in boat-building, service, and life on the water every day.

Jay Patton, President, American Boatbuilders Association, said of this year’s next Hall of Fame recipient, Bill Watters, “For 35 years, Bill has worked tirelessly to build Syntec Industries into one of the most successful and innovative marine suppliers. All along the way, he has been a champion for the boating industry, dedicating his time and efforts to numerous boards and committees, advocating for the greater good and leaving a lasting legacy.”

President of Syntec Industries, Bill Watters has been a driving force in the recreational boating industry for more than three decades. He has a passion for the industry like no other, and has selflessly contributed his time, resources and leadership throughout his career.

Bill attended the University of Georgia and graduated with a degree in Agricultural Engineering. Upon graduation, he began working at his father’s yarn manufacturing company, Integrated Products. He began selling yarn to Sea Ray, and after attending Marketing Days at the Miami Boat Show and IMTEC in Chicago, realized there was a great potential for carpet sales in the marine industry.

In 1986, he and his brothers Tom, Thad and Joe formed Syntec Industries and began selling carpet to the marine industry. Syntec has been a major supplier to the marine industry ever since. He brought innovative products to market and set trends for boat builders that positively influenced boat sales.

Thanks to Bill’s forward thinking, Syntec successfully weathered economic downturns and kept up with industry trends by diversifying its product lineup and expanding into other OEM markets, including the RV industry in the 90s, and the manufactured housing and multi-family markets in 2000 and 2009, respectively.

Bill’s leadership and service have also been instrumental to the growth of the recreational boating industry—every committee, board and industry initiative that he’s worked on have benefitted from his involvement. Bill has long been an ardent supporter of NMMA. He’s served in multiple roles on the MACD, NMMA, Grow Boating and MLA Boards, including Chairman of each. He has been AMD Chair- and Vice Chairperson, and a member of the Recreational Boating Leadership Council. To help expose boat builders to the best suppliers in the marine industry, Bill has also been a driving force behind IBEX, and has served as IBEX Planning Committee Chairperson.

Bill also gives back to his community with his time, energy and financial support. He supports multiple youth groups, local organizations and charities in his hometown of Rome, Georgia, including the Darlington School Board, YMCA, Jaycees, Boy Scouts of America, Floyd Healthcare Foundation, Kiki’s Kids, Coosa Valley Soil & Water Conservancy & Development and the Georgia Soil and Water Conservation Commission, to name just a few.

Bill and his wife Judy also own Oakdale Farms and raise Black Angus Cattle. While both are Master Cattlemen, Judy oversees the day-to-day operations of the farm. Bill works on the farm evenings and weekends. They have two children, Will and Landon, one grandson, William and another grandchild on the way.  Bill has become the consummate grandad and loves every minute of it!

Throughout his career, Bill has worked to develop relationships that strengthen not only his business, but others. He has always freely given his time and energy to the recreational boating industry and there is no doubt that the business of boating is better because of his efforts.

The NMMA Hall of Fame was established in 1988 and recognizes individuals who have made, or continue to generate, substantial and lasting contributions toward the advancement of the marine industry. It honors individuals whose names and deeds are synonymous with the pursuit of quality, innovation, and perfection within their respective spheres of expertise.

To learn more about past NMMA Hall of Fame inductees, visit the NMMA Industry Awards page.

The safety and security of the visitors and exhibitors who choose to attend IBEX 2021 is of highest priority. Please review the Health and Safety Protocol page for full details: www.ibexshow.com/covid-faqs.