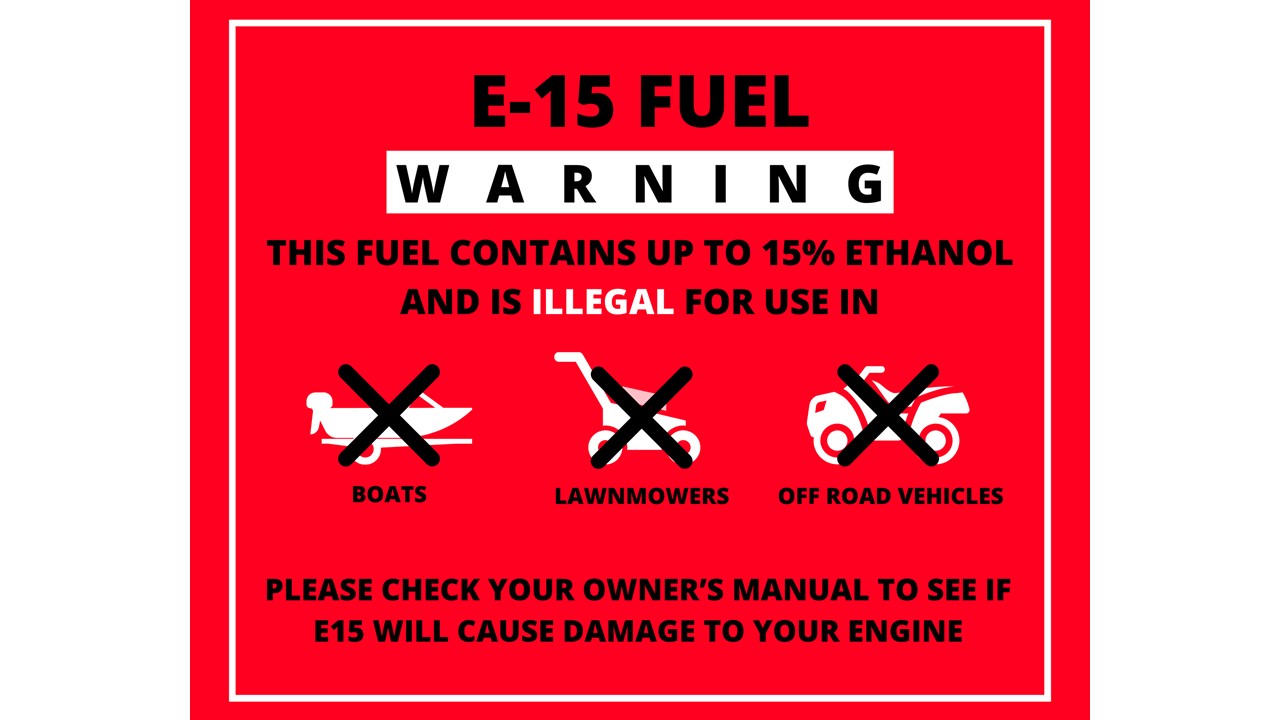 The results of a new national poll initiated by a group of organizations representing manufacturers, retailers, and consumers of non-road engine equipment and products reveals the vast majority of consumers find current E15 labeling at gas pumps to be ineffective in communicating the dangers of this type of fuel for usage in small engines like those in boats, off road vehicles, motorcycles, and lawn mowers.

Led by the National Marine Manufacturers Association (NMMA), the American Motorcyclist Association (AMA), and the Outdoor Power Equipment Institute (OPEI), the survey, conducted by Survey Monkey during the week of November 2, 2020, polled a nationally representative pool of 515 users aged 20 to 65 on their awareness of E15, a type of gasoline blended with 10.5-15% ethanol. The full results, which focused on consumer labeling of the fuel, can be found here.

Among the key findings:

Beyond the design and wording of the label, another concern for consumers is the inconsistent placement of the E15 label at gas pumps: Roughly 70% of consumers noted that inconsistent or hidden E15 label placement made the labels less effective overall.

This survey follows recent consideration by the U.S. Environmental Protection Agency (EPA) to change, or remove E15 labels altogether, to encourage greater use of the biofuel. While the EPA has not specified what form these changes might take, they would likely further limit consumer warning measures and further exacerbate the misfuelling crisis. As the survey results demonstrate, any E15 label decision that fails to prioritize consumer safeguards would likely result in significant safety and financial implications for millions of consumers of products banned for E15 use by EPA.

The results of this survey exemplify that the EPA should exercise a more robust label testing process to develop an improved label, expanding on the research put forth by NMMA and its partners. This solicitation of consumer label expert advice will ensure that the new label incorporates elements that are clear to the average person. For example, in the survey put forth by NMMA and its partners, consumers rated elements such as visual reinforcement, coloring, and the amount and type of language as the most effective to convey warning. To improve E15 labeling and educate consumers, NMMA and its partners developed a prototype label incorporating elements that consumers rated as most effective, including visual reinforcement, coloring, and clear, unambiguous language. In fact, 91.26% of respondents thought the prototype was either somewhat effective or very effective in showing that the fuel is hazardous to certain types of engines, compared to just 55.34% for the current label. As the EPA looks toward new labeling regulations, industry and consumer organization partners have called on the Federal government to factor in these considerations and solicit expert advice and consumer label research to better protect and inform consumers.

"If there's one thing apparent from the latest findings, it's that we should be doing more to educate and warn consumers about the potential hazards of E15—not obscuring this information and increasing the likelihood that people will unknowingly incur costly damages," said Nicole Vasilaros, Senior Vice President of Government and Legal Affairs at NMMA. "As a representative of the recreational boating industry, making sure our boaters and the broader public have the proper information they need to make decisions at the gas pump has been a major focus of NMMA and it will continue to be in the days ahead."

"This new polling confirms what our own surveys have shown for years – consumers need clearer labels at the fuel pump. There are more fuel blends and choices on the marketplace today, and consumers don’t always realize that what works in their car or truck, may damage their small engine equipment not designed, built or warranted for it,” said Kris Kiser, President & CEO of the Outdoor Power Equipment Institute and the TurfMutt Foundation. "As the regulator of the fuels marketplace, the Federal government needs to improve pump labeling and educate consumers on the fuel blends available and how they should be used."

“The E15 warning label has never adequately alerted motorcyclists to the dangers of using E15 fuel in their motorcycles. This survey shows how simple changes can go a long way to increase the effectiveness of the label, prevent inadvertent misfuelling and keep motorcyclists safer,” said Michael Sayre, AMA’s Director of Government Relations.

"The results of this survey couldn’t be clearer: the current warning label does not adequately educate consumers on the potential hazards of E15," said Adam Fortier-Brown, Government Relations Manager for the Marine Retailers Association of the Americas. "Updating this label to be more effective is long overdue. Doing so would provide a safer fueling experience for consumers so they do not unwittingly void their warranties and reduce the longevity and fuel efficiency of their engines. Our industry urges EPA to address this need by implementing a more effective label with standard placement on pumps to adequately educate consumers on current regulations."

"This information highlights what many boaters already know: not enough is being done to protect us from the harmful effects of higher ethanol blends on boat engines and fuel systems. While many boaters prefer having an ethanol free option, they have learned to live with gasoline blended with up to 10 percent ethanol. It is vital the EPA act to protect boating consumers from the higher ethanol blends using tools such as clear, unambiguous labeling at the pump," said David B. Kennedy, Government Affairs Manager, Boat Owners of the United States (BoatU.S.).

“The recently released E15 label survey results conducted by the National Marine Manufacturers Association are compelling and warrant consideration by policymakers,” said Mike Leonard, Vice President, American Sportfishing Association. “E15's presence in the fuel supply is dangerous to recreational boaters and anglers, especially with a warning label that fails to sufficiently convey the problems it poses to motorboat engines. These results suggest that there are important changes to consider for the benefit and safety of America's fuel consumers. We look forward to working with NMMA on holding the Environmental Protection Agency to a higher standard of fuel consumer safety and public education regarding E15 fuels.”

The overwhelming evidence from consumers suggests that policymakers should reevaluate the impacts of inconsistent E15 labeling, and look towards a renewed label testing process when putting forth alternatives. NMMA, AMA, and OPEI have long urged the Federal Government to gather consumer label research and reevaluate the ramifications of ambiguous E15 labels. Particularly at a time when many new consumers are entering the market, improving education and awareness on fuel blends and how they should be a top priority area for the EPA.