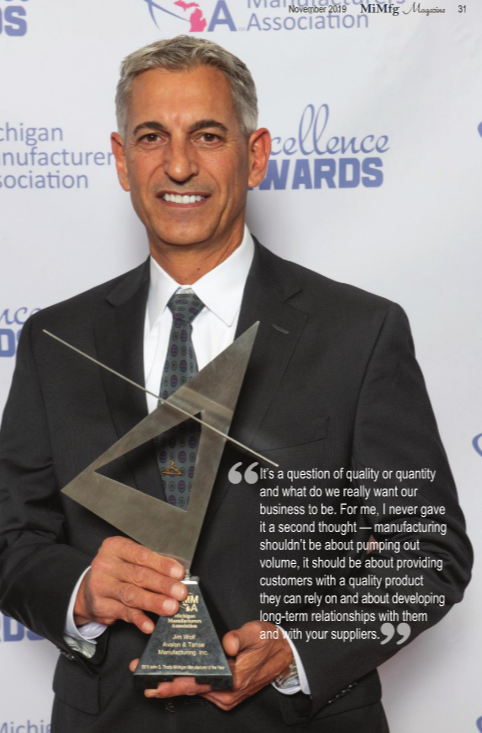 The fall season has been busy for Avalon and Tahoe. In early October, the Alma City commission granted a tax break for a 23,000 square foot expansion project that will bring an additional 35 jobs to Alma, bringing total employment at Avalon to over 400. The expansion will increase the facilities total space to 260,000 square feet and is expected to be complete by the new year. Additionally, in mid-October, State Senator Rick Outman toured the facility and met with employees to discuss workforce issues and Michigan budget negotiations.

Wolf praised the Avalon and Tahoe team during the award presentation, noting:

Receiving this award made me smile and, if I had to put a word to it, I’d say it gives me a sense of pride. We use the best materials, we make all the components in-house and we’re Michigan made, but I think it’s the team here that pushes us up a level. They understand my expectations, they understand our vision and we are all on the same page when it comes to how we get from point A to point B. They have a stake in the game and when you have a team like that that you can count on and they share your drive, it makes everything else run better. To get this award, it seals the deal for me that we are great. We’ll be better tomorrow, but right now we are great. I wouldn’t want to change a thing.

The MFG Excellence Awards is hosted by MMA and recognizes excellence in manufacturing by honoring those who make a positive impact in their community and their industry. The John G. Thodis Michigan Manufacturer of the Year Award is a prestigious honor that has been awarded since 1981. The award is named after MMA’s longest serving president and honors the important, positive and tangible contributions individual manufacturers make to their employees, customers and communities.