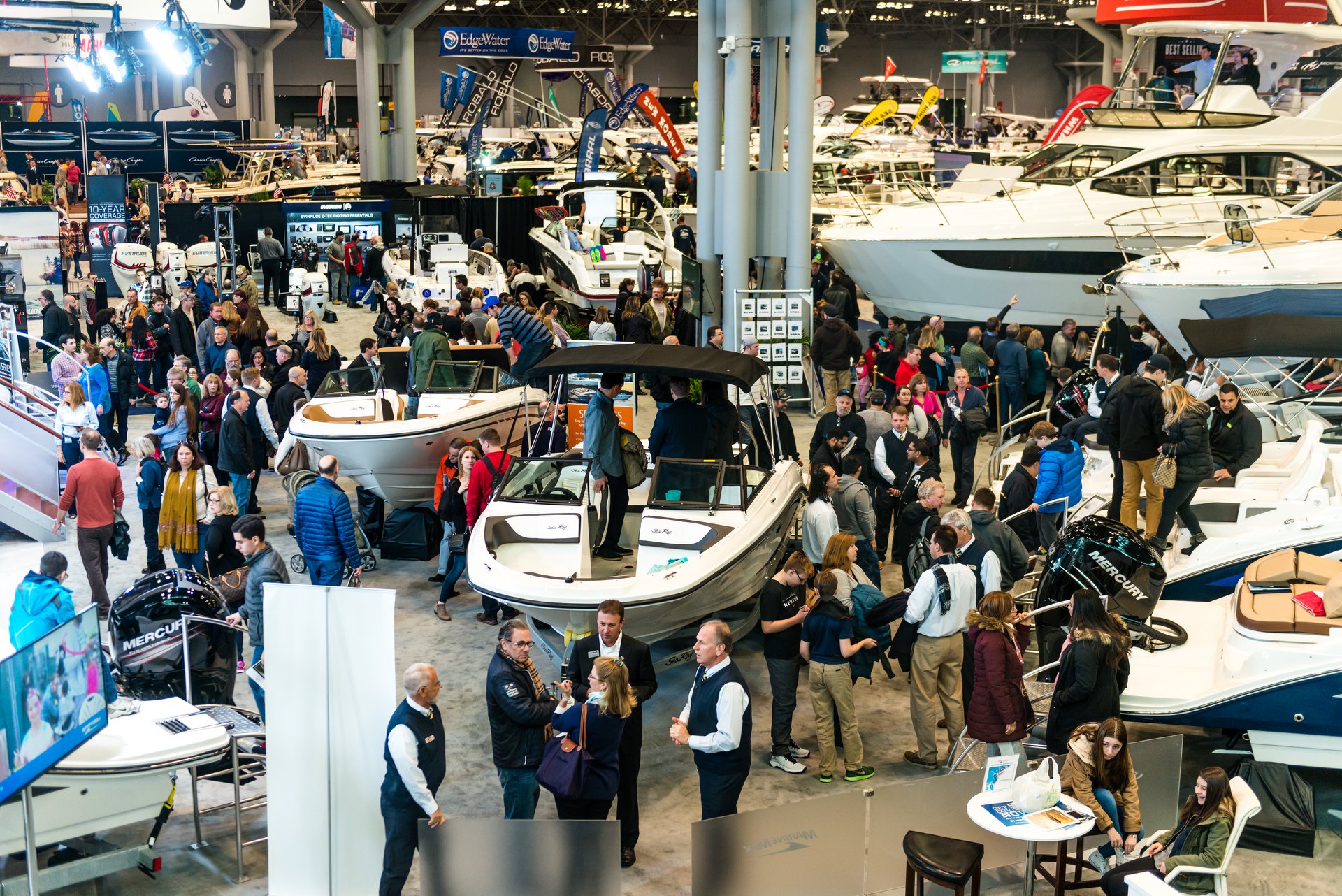 More than 150,000 people visited a NMMA boat or sportshow this past weekend to browse and buy the latest in boats and accessories.  All shows had reports of powerful sales despite bad weather in select markets, which still drew quality attendees and leads. Check out show highlights for Louisville, New York, Baltimore, Minneapolis and Schaumburg below:

The Progressive ® Insurance Louisville Boat, RV & Sportshow® closed its five-day run with an attendance of 41,181, down slightly one percent compared to 2018 (41,431), and up 9.2 percent from the three year average of 37,927 attendees. The show’s new “Super Thursday” was a smash hit, with Thursday attendance up 26 percent over 2018. “Super Thursday” included a $5 after 5pm ticket featuring one-day only special offers and meet-and-greets with superheroes. The overall sentiment from exhibitors was positive, with many reporting a strong start to the show with continued sales through the weekend. The show made headlines across all Louisville media. Media highlights include:

The Progressive® Insurance Minneapolis Boat Show ® continues to see attendance momentum, with total attendance at 38,258, up 11 percent from 2018 (34,402), and up 9.9 percent from the three year average of 34,815. The sold-out event featured the second year of the Minneapolis Boat Show Innovation Awards. Award winners were announced during the show’s sneak preview night. The Show also hosted about 40 students for the third annual Boating Career Day at the Show highlighting the career opportunities locally and throughout the industry. Boat show PR had the media thinking about summer, with headlines making waves throughout the Minneapolis-St. Paul area. Media highlights include:

The Progressive® Insurance New York Boat Show® brought out a total of 41,582 attendees to the Javits Center down just two percent from last year, but up 2.7 percent from the three year average of 40,471. A main train running into the city was shut down during the Show, likely affecting attendance numbers; however reports were heard of very strong sales and some exhibitors reported New York as one of the best Shows for them in years. Additionally, the five-day event made waves with media both nationally and locally covering the industry’s seven years of continued growth, the latest innovations and trends and the Show’s 350+ boats and interactive features. Career Day on January 23rd drew more than 100 students interested in working in the boating industry, followed by the Lieutenant Governor of New York, Kathy Hochul opening up the 114th New York Show with remarks and a ribbon cutting, all highlighting the importance of the boating industry and the abundant careers available.  NMMA President, Thom Dammrich, also rang the closing bell at the NYSE on January 23rd and participated in many media interviews throughout the week.  Media highlights include:

The Progressive® Insurance Baltimore Boat ShowTM totaled 14,104 visitors over the four day weekend, down five percent from 2018’s attendance of 14,878, but up 2.3 percent over the three year average of 13,786.  Many exhibitors expressed they were having strong sales and collecting quality leads. The Show also hosted a Boating Career Day with the Marine Trades Association of Maryland (MTAM) on Friday, January 25th hosting more than 40 students from local high schools and technical schools interested in working in the boating industry. Additionally, the Show’s unique features such as the Virtual Reality Fishing Simulator, Progressive Boat Club, the ninth Annual Crab Picking Contest, and expansive lineup of boats brought out all the major local broadcast and traditional media. Media highlights include:

Finally, the Progressive® Chicagoland Fishing, Travel & Outdoor Expo rounded out the five show weekend, bringing 16,747 attendees to the Schaumburg Convention Center, down 16 percent from 2018’s attendance of 20,055 due to snowfall and freezing temperatures causing less than ideal driving conditions. However, the seminars each day were jam packed with attendees and exhibitors reported strong sales and excellent travel bookings. Interactive features like Wings & Talons, the 5,000 gallon fish tank with pro anglers and more generated solid PR coverage. Media highlights include:

A full schedule of all our boat and sportshows can be found here: www.boatshows.com