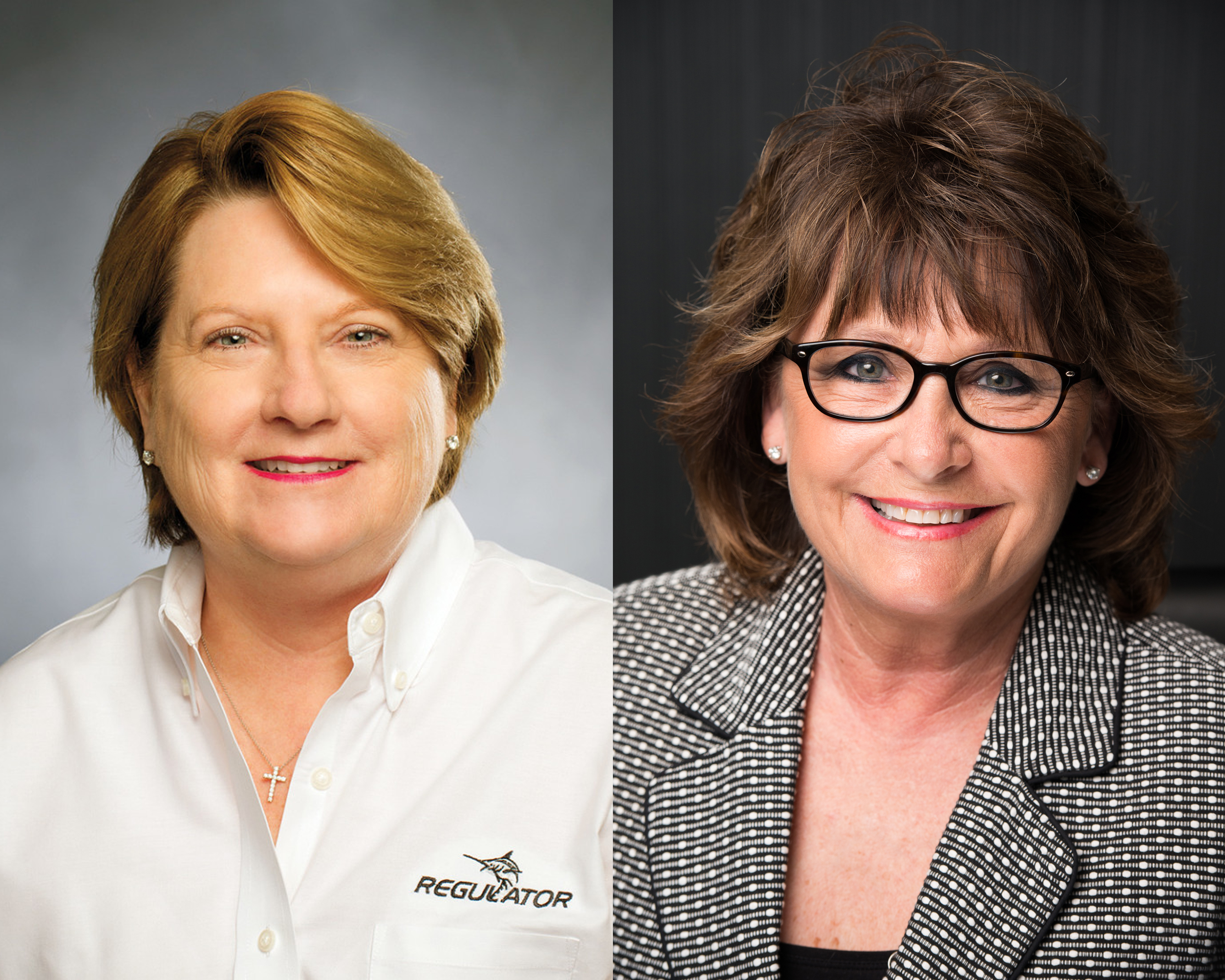 The Foundation for Recreational Boating Safety, Education and Environmental Awareness announced today the recipients of the 2018 Hammond Marine Industry Leadership Award – Regulator Marine President Joan Maxwell and Grady-White Boats President Kris Carroll – for their extraordinary service and commitment to advocacy on behalf of the recreational boating industry. Kris and Joan will be honored at the American Boating Congress (ABC) in Washington, D.C. during the conference’s Farewell and Awards Ceremony Lunch on Friday, May 11.
Kris Carroll joined Grady-White Boats in 1975 and has held several positions including the role as Vice-President of Engineering, Information Systems and Accounting in 1986. Promoted to President in 1993, Kris continues to lead Grady-White Boats in delivering the vision “Together, Delivering the Ultimate Boating Experience” to customers.
Along with her husband Owen, Joan Maxwell founded Regulator Marine in 1988. She has been active in every aspect of the business and currently focuses on strategic leadership.
Both women have dedicated their careers to the betterment of the recreational boating industry, sitting on several marine industry boards and committees, including the NMMA Board and NMMA’s Boat Manufacturers Division Board, and have attended more than 40 American Boating Congresses collectively. Early champions of the BoatPAC and industry advocacy, Kris and Joan have fought for dozens of years to ensure that issues vital to recreational boating are front and center with the nation’s decision makers. They were also honored with the MRAA Darlene Briggs Marine Woman of the Year award in 2002 (Kris) and 2003 (Joan).
“The persistent dedication and commitment of time Joan and Kris have contributed to our industry over the past two decades is immeasurable, from Joan’s advocacy on the Miami Boat Show relocation during her service as NMMA Chair, to Kris’ championship of BoatPAC and helping to grow BoatPAC to the largest levels and broadest number of contributors ever,” says NMMA president Thom Dammrich. “Their consensus building approach has helped to unify the industry, build ABC to the important legislative event it is today, and contribute to reform needed on a local and national level to benefit the boating industry and the country’s boaters and anglers. I’m honored to present this award to two of the hardest working people in our industry.
In 1997, Mr. Robert (Bob) Hammond, founder of Glastron Boats and a renowned industry pioneer, made a donation to the NMMA Foundation to establish an annual award recognizing individuals who have helped grow and protect the industry through advocacy – stopping unwanted government regulations or seeking needed government regulation – and who have demonstrated dedication to the long-term health of the entire marine industry. The Hammond Marine Industry Leadership Award is presented annually during the American Boating Congress. The 2016 Award was the first presented during ABC.
The Foundation for Recreational Boating Safety, Education and Environmental Awareness is dedicated to educating the public about important issues impacting the recreational boating industry.