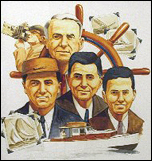 With a borrowed camera and an eye for graceful lines, 13-year-old Morris Rosenfeld took his first photograph of a boat. The 1897 picture of a three-masted ship on lower Manhattan’s East River earned him a $5 prize in a magazine photo contest that would buy Morris his own camera—a large format, single-shot Gudlach from a pawnshop.

Aspirations to be an artist led the first-generation Austrian immigrant to study drawing as a teenager at New York’s Cooper Union. By 1905 he was managing a photo studio, working out of an office at the German-American newspaper Staatas Zeitung, and freelancing in the competitive days of early photojournalism.

An apprenticeship under marine photographer Edwin Lewick led to assignments covering the first U.S. powerboat races and the most prominent sailing events of the day. By 1910, Morris proved to be businessman as well as gifted photographer, opening a prospecting studio and lab on Nassau Street in the harbor-side Bronx community of Island City.

Although the studio business was largely supported by commercial work for the clients such as AT&T, Western Electric and Gimbels, Rosenfeld’s greater passion and reputation—a passion shared with his sons David Stanley and William—was in marine photography. By the time Morris’s sons reached 13, they too were wielding cameras, processing film and running the Rosenfeld chase boat.

The boat, known as FOTO to skippers up and down the East Coast, was actually the third in a series of chase boats that opened up a new avenue of photography to the Rosenfelds. Fast, dry and maneuverable, FOTO gave its four photographers mobility to position themselves in the midst of the racing action, to select an ideal angle, to compose the relationship between boat, sea and sky — a style which set the standard for the other photographers.

Spending up to 10 hours a day on the water working as team with the helmsman getting the boat in position and the photographer capturing the right moment, the Rosenfelds amassed hundreds of thousands of images spanning most of boating’s history in this country. Regardless of who took the shot, all photos were credited “Morris Rosenfeld & Sons” the name by which the family business was known.

Rosenfeld & Sons remained a family concern into the 1960s. David gave up full-time work at the studio in 1937 to freelance on his own and to teach photography, but continued working with the family every weekend until 1965. At about the same time, William left the studio to work with the American Boat & Yacht Council and NMMA’s predecessor group, the National Association of Engine and Boat Manufacturers. Morris Rosenfeld, wearing a Panama hat with cigar in hand, also remained a familiar sight on FOTO into the 1960s. He died in 1968 at the age of 83, leaving Stanley to run the business and to forge an independent identity in the field.

From Morris’s first photo of a boat in 1897 to Stanley’s America’s Cup coverage through the 1980s, the Rosenfeld photographs number more than one million. Today, the Rosenfeld Collection is the largest assemblage of marine photography in the world. In 1985, it moved out of its storage in 548 boxes into the well-tended holdings of Mystic Seaport Museum in Mystic, Connecticut, where nearly a century of boating images will remain preserved for the other generations.