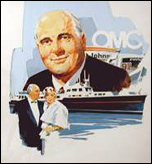 Born in 1907, the same year his father built a prototype of the first mass marketable outboard motor, Ralph Evinrude was destined to be a part of the outboard business. Home every weekend from the University of Wisconsin to work in the Elto Outboard Motor Company run by his parents, he eventually left his engineering studies in 1927 to assist in the development of a new four-cylinder motor, the Elto Quad. Ole and Bess Evinrude’s only son would go on to spend the next 55 years with the family business.

During his first seven years, Ralph learned the business thoroughly, holding a number of positions in both engineering and marketing areas. At the age of 27, he took the reins of the company as president following his father’s death in 1934. Two years later, Ralph combined the company with the Johnson Motor Company of Waukegan, Illinois, to form the Outboard Marine and Manufacturing Company. He was elected president and a director of the expanded firm, which later shortened its name to Outboard Marine Corporation.

During World War II, Ralph put in 12 to 14 hour days managing the company’s production of war equipment. He assisted the war effort by standing watch over the icy waters of Lake Michigan on evenings and weekends. Ralph also donated his own personal watercraft to help the Coast Guard patrol the shores of Florida.

In 1953, Ralph was elected vice chairman of the board and chairman of OMC’s Executive Committee. During his tenure, Ralph elevated the family-run business to a Fortune 500 company. In addition to expanding the company’s offerings to include sterndrives and lawn care products, he played an active role in the development of modern fully enclosed engine styling, noise silencing advances, electric starting and remote controls. In 1982 when Ralph retired as chairman, OMC employed more than 9,000 persons in operations throughout the world.

After his retirement, he lived in Jensen Beach, Florida with his wife, actress and singer Frances Langford. They shared interests in business and boating and spent much of their time aboard their 118-foot yacht Chanticleer. Prior to his death in 1986, he headed up three philanthropic foundations and founded the Ralph Evinrude School of Marine Technology at the Florida Institute of Technology. Continuing the legacy of his father, Ralph Evinrude made a lifetime contribution to the sport and the technology of boating.