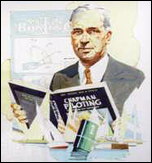 During his lifetime, Charles "Chap" Chapman was considered “the authority” of American recreational boating. For over 55 years he functioned as editor, and later vice president and publisher of the magazine Motor Boating (now titled Motor Boating & Sailing). But it was the book, “Piloting, Seamanship & Small Boat Handling” that became Chapman’s most fitting monument. Why? Because it is considered the “bible” for millions of recreational boaters—making seafarers safer and boating more enjoyable.

At an early age, Chap became interested in boating. He studied naval architecture and mechanical engineering at Cornell University.

While still in his twenties, Chapman became a pioneer of long distance and endurance motorboat races. For example, he was Gar Wood’s navigator on the famous Miami-to-New York race, setting a record that would stand for three decades!

In addition to being an author and competitor, Charles was a leader in organizing the recreational boating industry. He was one of the founding fathers of the United States Power Squadron (holding certificate number A-1) and served as a chief commander. He also served as chairman of the American Power Boat Association and later was elected as its first Hall of Fame member. And, in 1955, Chapman was awarded the “Ole Evinrude Boating Foundation” award for his lifelong contributions to boating.

In an anecdote related by Chap’s daughter, Mary, she recalled a humorous incident when the Chapman family was motorboating off Long Island Sound. It seems while nearing Oyster Bay, and with the right of way, another boater started to cross the bow of “Chalma”, Chapman’s boat. Slowing down to properly evaluate the situation, Charles and the Chapman family heard the errant skipper shout, “Watch where you’re going! You should get a copy of Chapman’s Piloting Book!” (If the boater only knew who he was talking to!)