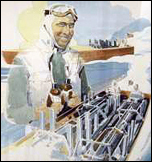 The man who was name after Presidents Garfield and Arthur was also the first person to travel over 100 miles per hour on water. This legend, Garfield Arthur Wood, who began his racing career at the age of eighteen, would come to dominate powerboat racing headlines for over two decades.

As inventive in industry as he was in creating trophy-winning speedboats, Gar Wood capitalized on a concept first conceived by his father to utilize hydraulic hoists to facilitate the unloading of truck cargo. And it was upon this patented invention that Gar generated the financial means to design, construct and pilot World Championship speedboats from 1917 through 1933.

When asked what he considered to be his greatest personal triumph, Gar Wood responded by recalling the highlights of the 1920 British International (“Harmsworth”) Trophy race; an event he would win eight times as a driver and nine times as an owner! The 1920 Harmsworth victory on England’s Osborne Bay was the first time since 1911 that an United States team would recapture what was considered to be the traditional symbol of speedboat supremacy. His craft, the 26-foot MISS AMERICA 1 swept both heats in a best two-out-of-three format with a record-setting average speed of 52.43 miles per hour.

Following his retirement from racing, the Detroit, Michigan native remained active in boating. In fact, during World War II, Gar assisted in the development of Navy Patrol Torpedo boats which used the same engine installation concept pioneered in the MISS AMERICA X. Today, the spirit of the Gray Fox’s contribution to powerboat racing is maintained by the Unlimited Hydroplane award which bears the title — The Gar Wood trophy.