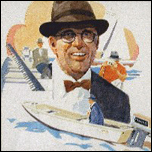 Richard Fisher, as a young man fresh out of college, toyed with the idea of building boats out of balsa wood but never pursued it. Instead, he founded Sigma Instruments, specializing in electrical-relays and street light controls. The idea of buoyancy continued to intrigue him, however, and when expanding plastic foam became available, he saw the opportunity of applying it to boat building. The formula Fisher came up with resulted in foam, which adheres to the inner and outer fiberglass skins, producing a sandwich-like construction. On that formula, he founded Boston Whaler.

Skeptics often dismissed Fisher’s ideas as merely “different,” but he confounded the doubters when, in 1958, he gained wide-spread recognition and attention by selling a 13-foot boat that others had derisively labeled a “soap dish” due to its blunt bow, low gunnels and lack of deck and windshield. Fisher had collaborated with his lifelong friend, C. Raymond Hunt (1992 Hall of Fame inductee), to achieve this hull design, which utilized the use of foam construction. Fisher introduced the 21-foot Whaler in 1970.

The Boston Whaler line of “unsinkable” boats represented a breakthrough in design and materials. The boats had become well-recognized by 1961, when Life magazine pictured the then-revolutionary foam-core craft keeping Fisher afloat, even though the boat was sawed in half. Fisher was then pictured motoring away in the remaining half. Also in that year, Fisher introduced the first boat with a center console, the 16-foot Whaler. Bigger, deeper, more comfortable and easy to trailer, the design allowed fishermen the flexibility of movement in the sport.

What always concerned Fisher the most about his boats was their utility and safety. His product became an industry standard among Coast Guard and other government safety regulators because of its strong safety attributes.

Fisher was a Harvard University philosophy graduate, a lifelong sailor, perpetual tinkerer and designer, always excited about working out problems and coming up with solutions in a “hands-on” way. He sold Boston Whaler in 1969, but continued working with the company through 1971. Fisher, a true pioneer and a man ahead of his time, found intrigue in improving the four-cycle non-polluting outboard. Fisher died September 25, 1995 at age 81.