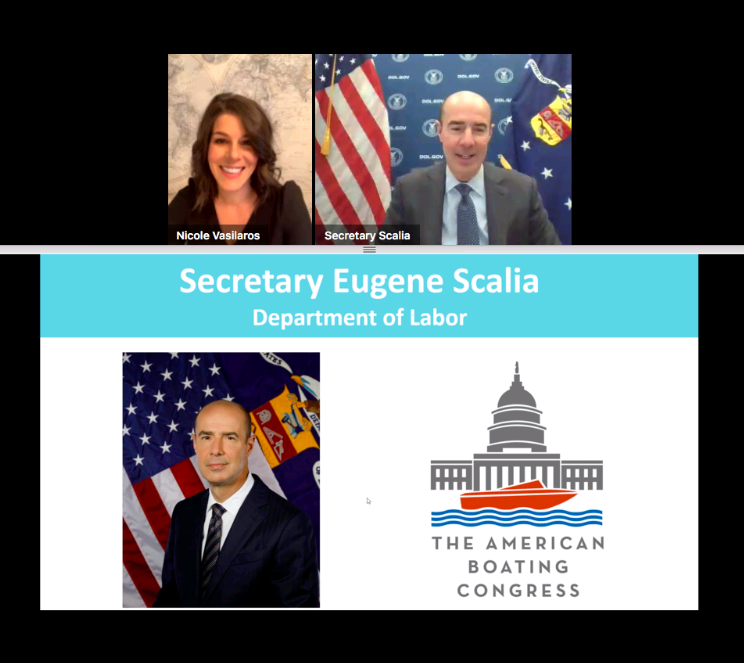 NMMA wrapped up a successful virtual 2020 American Boating Congress (ABC) yesterday with a full slate of presentations from several Trump administration officials, political strategists and an economist. Hundreds of participants joined the virtual event again for its second day of programming, where panelists discussed the economic and political landscape amid the COVID-19 pandemic and beyond.

The afternoon panel session kicked off with a conversation with Department of Labor Secretary Eugene Scalia, who spoke about the challenges the Department has recently faced, shifting from a strong economy and record job creation in the beginning of the year to the effects of the COVID-19 pandemic. Secretary Scalia discussed the April jobs report and the impacts on the workforce and the economy that the Department expects to see as we continue towards a period of recovery. He also highlighted the administration's efforts to get American workers and businesses back to work as soon as possible and the importance of reopening the economy while keeping workers safe.

With the 2020 election just under six months away, a major focus of yesterday's ABC panel sessions was the political outlook for 2020. Gabrielle Quintana Greenfield, Battlefield Director for the Democratic Congressional Campaign Committee (DCCC), which works to support Democratic candidates for the House of Representatives, joined the discussion to provide updates on the Democratic campaign strategy ahead of the election. After the DCCC helped Democrats win a majority in the House in 2018, Gabrielle discussed the Committee's renewed focus on battleground states this year.

Next, ABC attendees watched a video message from David Bernhardt, Secretary of the Interior – an agency with over 70,000 employees that protects 20 percent of the nation's lands, including national parks, monuments, wildlife refuges, and other public lands. Secretary Bernhardt is spearheading efforts to reopen our national parks, and spoke about the Interior Department's facility-by-facility review process to restore access to public lands and waters. An avid boater and angler himself, the Secretary emphasized his belief that public lands and waters will play a significant role in our country's economic recovery.

The economic recovery following the COVID-19 pandemic is top-of-mind for marine manufacturers – many of which are small businesses – across the country. Trevor Hanger, Strategic Advisor at Forbes Tate Partners, walked attendees through a breakdown of the current economic landscape and how government actions such as the CARES Act play a role in helping businesses survive the current crisis. Trevor also discussed the prospects for recovery and the various political and economic elements at play in the markets.

NMMA's insider perspective on the political outlook continued with a presentation from Betsy Ankney, Political Director at the National Republican Senatorial Committee (NRSC). Drawing from her broad experience in Republican gubernatorial and congressional campaigns, Betsy provided a rundown of the Senate races that Republicans are focused on winning or defending in this election cycle.

To conclude the guest panel discussions, Secretary of Commerce Wilbur Ross highlighted the administration's efforts to support the recreational boating and fishing industry during these unprecedented times. He pointed out NOAA's implementation of the historic Modern Fish Act and the Department of Commerce's commitment to support the boating and fishing industry. He also noted that during the spring and summer months – and especially during the pandemic – there is no better place to be than out on the water. Ahead of the Secretary's remarks, Jeff Angers, President of the Center for Sportfishing Policy, presented Secretary Ross with the Jack Lawton Jr. Conservation Award for his commitment to marine and fisheries conservation.

Nicole Vasilaros closed out the event with a presentation on the recreational boating industry's top priorities in the next COVID-19 relief measure, which include economic relief for small businesses, infrastructure, and trade. She described NMMA's four-pronged strategy to support boating businesses during this time, and highlighted the wins that the boating industry has already seen in previous packages. Lastly, she commended industry leaders for their strong grassroots efforts over the course of ABC 2020 to make sure the boating industry is heard by policymakers.