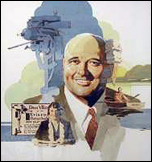 While picnicking on an island on a hot August day, Ole Evinrude wished to purchase some ice cream for Bess, his fiancée. The only problem, the ice cream store was several miles away. So, by way of a rowboat, Ole proceeded on the journey to and from the store. However, on the way back, the ice cream melted. Frustrated, Ole asked himself, “Why not build a gasoline motor to hitch up to a propeller, and stick it on the end of a rowboat?”

A pattern maker by trade, Ole finished his first outboard motor in 1907 And even to this day, outboard motors are basically the same: using Ole’s idea of a vertical crankshaft, horizontal flywheels, and set of bevel gears. However, today Evinrude (and Johnson) motors will propel a boat a bit faster than the ’07 version (150 mph versus 5 mph).

After several years of relining his original concept, and with the urging of Bess (now his wife) to develop a “commercial use” for the motor, the Evinrude Motor Company was established in June, 1910. The company experienced great success until, in 1913, the health of Bess started to fail. Thus, Ole sold the company and they began to tour the country along with their young son, Ralph.

Due to a “no compete” clause after the sale of the company in 1913, it was not until 1920 that Ole established another outboard company named “ELTO” (Evinrude’s Light Twin Outboard). Through the 1920’s, outboard production was highly competitive between the “old” Evinrude company (now owned by Stephen Briggs), Elto, and Johnson Motor Company. Then, at the instigation of Briggs, the formation of Outboard Motors Corporation took place in 1929 as a result of a merger between the “old” Evinrude company, Elto and Lockwood-Ash. The result was a $4 million company.

After the death of Bess in 1933, Ole’s health began to fail, too. He passed away in 1934. But his son, Ralph, would continue the family tradition.